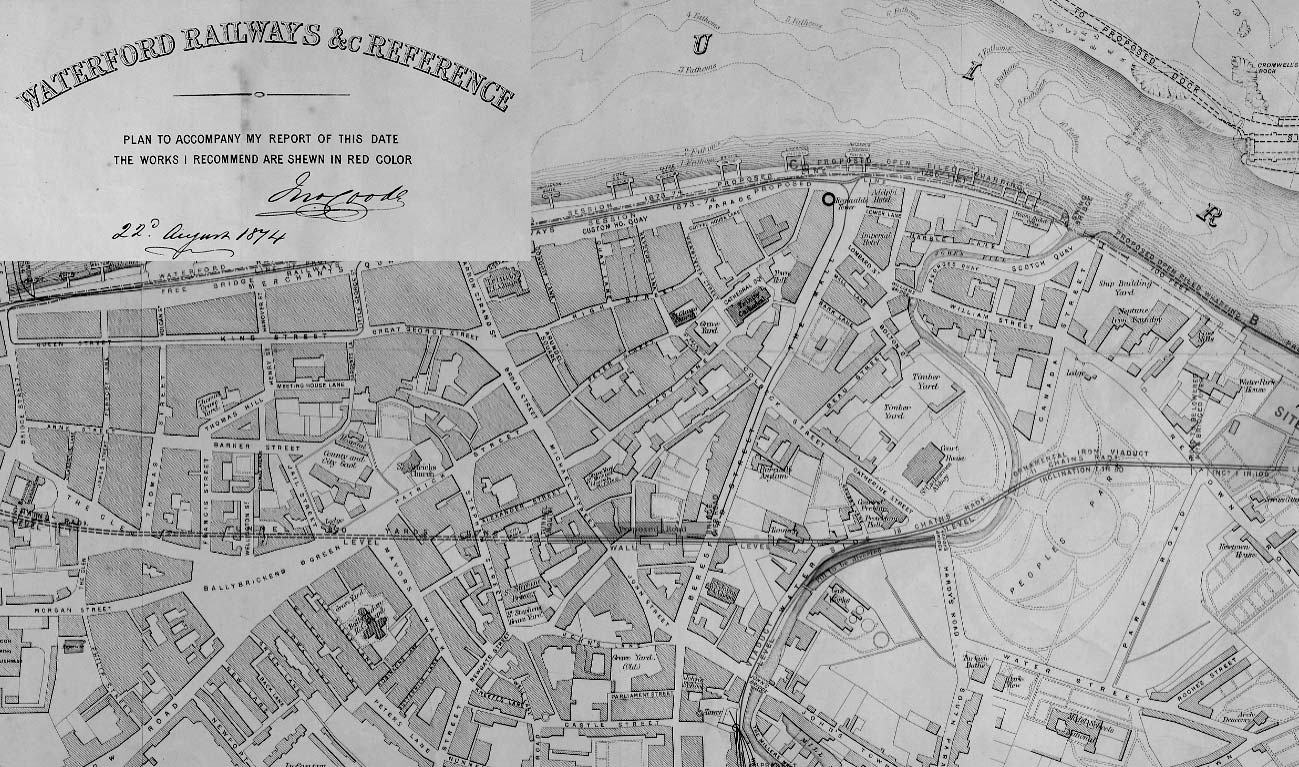 Notably he also invested in the development of the Lismore, Dungarvan and Waterford Railway and the Fermoy and Lismore Railway building a beautiful station for his estate from Portland stone. The shed for the locomotives was constructed out of the same stone similar to match the impressive  castle nearby. When the local fishery was thriving, fresh salmon could be boxed, put on a train and would arrive in London to be sold in Billingsgate market next morning. The 43 mile stretch of railway from Waterford to Lismore was the most expensive line to be built in Ireland at the time. It was known locally as ‘The Duke’s Railway’ after its Chairman and main shareholder.

A civil engineer, he was born in Bodmin, Cornwall, the son of a solicitor. He was educated at Bodmin Grammar School and studied civil engineering under James Rendel of Plymouth. He has been described as the most distinguished harbour engineer of the nineteenth century for his works on the harbours of Table Bay (South Africa) and Colombo (Sri Lanka). In 1878, he was brought out by the Melbourne Harbour Trust to report on works for improving the port where large ocean-going ships had been prevented from approaching the city by the narrow and winding Yarra River.  His plans were the basis on which the modern port of Melbourne has been developed. He was knighted in 1872 and served on the International Commission of the Suez Canal in 1884-92.

In Ireland he was the expert of choice to help develop the ports of Wexford and Waterford as well as navigation of the river Bann at a time when road transport was unreliable and very slow. His suggestion for Waterford was to create a Central Station near Reginald’s Tower where all the six railways would converge with a tunnel through Bilberry Rock to bring the Waterford, Dungarvan and Lismore line into the city. Sadly this never happened.

Dargan was born on 28 February 1799, in County Carlow. His father was a tenant farmer and it is thought that he attended a local hedge school where he excelled in mathematics and accounting. He subsequently worked on his father’s farm before securing a position in a surveyor’s office in Carlow. Through connections, the young Dargan began working with the Scottish engineer Thomas Telford on the London-Holyhead road between 1819 and 1824 after which he was asked to begin work on the Howth Road, from Raheny to Sutton in Dublin as well as on roads in Carlow and Louth. Dargan also served as assistant manager for about three years on the Birmingham & Liverpool Junction Canal and the Middlewich Branch back in England.

In 1825 the Irish parliament decided to launch a plan for the Dublin & Kingstown Railway to link Dublin Port with the natural deeper harbour of what is now Dun Laoghaire. Dargan worked alongside the engineer Charles Vignoles to plan the route of what is considered by some the world’s first commuter line which opened on 17th December 1834. By 1853 he had constructed over six hundred miles of railway in Ireland as well as having worked on the Liverpool and Bury Railway and the trans-Pennine Manchester and Leeds Railway.

Queen Victoria visited Dargan at his residence on 29 August 1853 offering him a baronetcy which he declined. He is known for his work on the Dublin and Drogheda Railway, the Great Southern and Western Railway, the Midland Great Western Railway, the Waterford and Tramore Railway and the extension of the Dublin, Wicklow and Wexford Railway, of which he was chairman. He is often referred to as the Father of Irish Railways.

Considered one of the greatest figures of the Industrial Revolution, responsible for ground breaking designs that included dockyards, the Great Western Railway, a series of record breaking steamships including the first propeller-driven transatlantic steamship, bridges such as Clifton Suspension Bridge and numerous tunnels which revolutionised public transport and engineering methods. He proposed connecting Dublin with Wexford to connect with his plans to develop a line from London to Fishguard.

When Dragan’s Dublin and Kingstown Railway was to be extended to Bray (July 1854) and then on to Greystones, the route from Bray to Greystone posed serious engineering problems. A coastal route had to be chosen because land owners would not permit the simpler inland route.  To traverse Bray Head, composed of Cumbrian shale, Dargan relied on Brunel’s experience from his earlier work on the Thames tunnel and the Clifton Suspension Bridge to construct three tunnels. However, in two locations Brunel relied on constructing wooden trestle bridges. Sadly the one built over the Brandy Hole ravine would be the site of a fatal accident on August 9th, 1867 when the 6.30 a.m. Enniscorthy to Dublin train derailed. This route has been known as Brunel’s Folly ever since given the enormous cost of maintenance as the route has had to be realigned six times since opening, with four deviations and two minor realignments due to rock falls.

As well as working as the engineer to the Dublin & Wicklow Railway, Brunel was involved with the Waterford, Wexford, Wicklow & Dublin Railway until 1856, and was the engineer-in-chief to the Cork & Youghal Railway from 1847 until 1853 which originally intended to extend to Waterford.