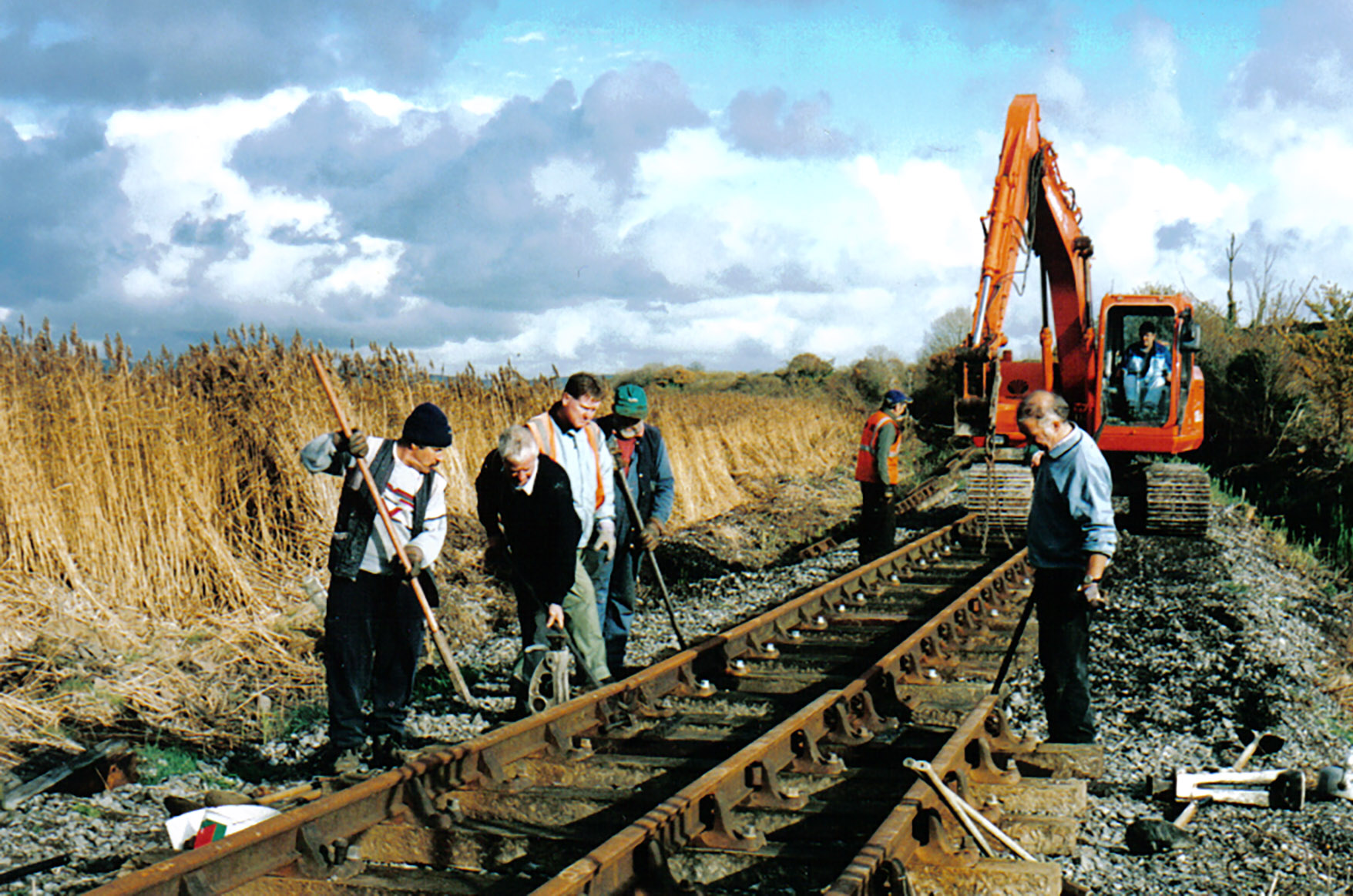 Waterford has a rich railway heritage with six railway lines once operating in to Waterford, two now remain. Over drinks at a New Year’s Eve party in 1996, Frank O’Donoghue, Chief Executive of Waterford Chamber and Michael Wilcock, a railway enthusiast floated the idea of developing an abandoned line as a tourist attraction to preserve and promote Waterford railway heritage.

The Tramore line was the preferred option as it was much loved by the people of Waterford. Unfortunately, the station at Poleberry and the much of the original line had already been built over. The next line to be considered was the Waterford to Cork Line which closed to passengers in March 1967.  The section from Waterford to Dungarvan had re-opened from 1970 to service a magnesite factory in Ballinacourty outside Dungarvan. Traffic ceased as the factory closed in 1982.

The section between Kilmeadan and Waterford on the old Cork line was the obvious choice for development. The station and track bed were still in place and the track followed the majestic River Suir, it was once known as the most scenic railway journey in Europe.  This was the beginning of Waterford Suir Valley Railway (WSVR).  Agreement was needed from the CIE Board to lease Kilmeadan Station and the track bed.  It became a FAS Project, employing the best of railway expertise.  Dan Donovan, a retired inspector with 52 years permanent way experience with Irish Rail supervised track laying with a crew including Johnny Connors, Pat Daniels, Michael Eden, Edward Lacey and Thomas (Tosh) Smith.  Michael Doyle, an ex CIE mechanic took on the role of chief mechanic.  Peter Roche, Iarnród Éireann, District Manager, was Chairman of the Board.   Maria Kyte, with 20 years’ experience in the tourism business was employed to manage the project.

The track had originally been Irish standard gauge 5ft 3in, the WSVR board decided to develop a narrow-gauge track as the rolling stock was easier to purchase and the open carriages were more attractive as a family-friendly tourist attraction.

Railway track procured from Irish Rail was regauged from 5ft 3” to 3ft narrow gauge. The rail is 87lb ‘bull head’ rail and sits in cast iron chairs, bolted to wooden sleepers. These lie on limestone ballast which is tightly packed to act as a locking system to keep the line firm and steady for the weights and speeds of the trains travelling over it. This back breaking work was done manually with shovels and picks as it would have been done when the railway was built in 1870’s.

The rolling stock was purchased from Alan Keef Ltd in UK. The Simplex Locomotive, Enterprise 3 was reconditioned after a busy life working in the peat industry in Northern England and in the excavation of the Channel Tunnel. The carriages were made for a theme park in South America. The deal fell through so WSVR purchased them.

With hard work and the support of government agencies such as FÁS, Waterford Leader Partnership, LEO, CIE Group Property, Iarnród Éireann, Waterford Chamber, sponsors and volunteers the dream became a reality. The railway opened to the public in 2003 with 10km of track from Kilmeadan Station to Bilberry, Waterford City.

The railway is a social enterprise, overseen by a voluntary board of directors, bringing different skills to the table. There are several paid staff, all of whom began on government back to work schemes, CE, TUS and RSS. At any time, there would be six or seven scheme participants working on the project. All the train drivers work on a voluntary basis with a crew of four coming in each day.

Echoing the years gone by on the line when there were race specials, match specials and beach specials, the railway runs special trips including the Sunset Express, Spooky Express at Halloween and Santa Express at Christmas.

Waterford Greenway opened in 2017 giving the railway a new lease of life and securing its future as the station became a pitstop on the Greenway. In 2019 the Whistlestop Café opened in the station.

While the railway was in operation it reflected the history of Ireland. It was not only a line for commerce as the Duke of Devonshire envisaged, it was a line full of life, of tragedies, celebrations, tearful partings and joyous reunions, it was a line of work, of sport, of leisure, expanding horizons for whole communities who had never ventured far and now opened up the world to them, a triumph of engineering and hope.

The future looks bright for the Waterford Suir Valley Railway. Now an integral part of Waterford Greenway, Kilmeadan station will be further developed with a museum dedicated to rail in the future. WIT students will use the line to travel to the campus at Carriganore, along with tourists visiting Mount Congreve Gardens when the track is extended into Waterford City at Grattan Quay and operating an electric rail bus. It will be a very exciting day for everyone associated with WSVR when a steam engine rolls on the tracks as it did in the 19th century – plans are in place and like everything else on this track, determination will see big dreams for a little railway come true.